The McKinnon Dash Company - It Didn't Change with the Times 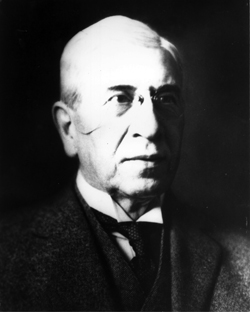 In the spring of 1980, workmen prepared to paint the exterior of a Hobart Corporation building, removing layers of old paint from the building’s walls.  When paint was taken off one wall, a bit of Troy history appeared.  Underneath the paint was the name of the building’s original owner the “McKinnon Dash Company.”   In the late 1890s and early 1900s, the McKinnon Dash Company was one of Troy’s most important companies, but by the 1920s, it was gone.  The product it produced had become obsolete.

The company did not start in Troy.  It began in 1878 at St. Catherine’s, Ontario, Canada as a partnership between Lachlan Ebenezer McKinnon and H.H. Mitchell.  There they operated a business named McKinnon and Mitchell Hardware, which manufactured hardware for use with horses or horse-drawn vehicles, including patented buggy and carriage dashboards and fenders.  Their partnership ended a decade later in 1888, and McKinnon renamed the business the McKinnon and Dash Hardware Company.

After the partnership dissolved, McKinnon expanded the company into the United States.  A subsidiary opened in Buffalo, New York in 1892 and a factory at Columbus, Ohio in 1894.  (At some point, factories were also opened in Jackson, Michigan and Syracuse, New York.)

It should be noted that there was an economic depression in the United States in the early to mid-1890s.   A good industrial base was needed to keep Troy and its residents prosperous.   The Troy City Council granted money to a variety of businesses so they could buy land and build factories.  Several directors of the Troy Land Improvement Company are remembered as leaders of Troy, particularly Thomas B. Kyle, George S. Long, Augustus G. Stouder, and Thomas B. Wheeler.

In March 1895, the Troy Land and Improvement Company bought the 110 acre McKaig farm for $22,000.  On the McKaig land, they built what was in effect a business park—one of America’s first.   The Troy Land and Improvement Company made offers to several companies to build factories on the McKaig farm.  The McKinnon Dash and Hardware factory in Columbus was one of those businesses.  The company accepted the offer and moved their factory to Troy along with its manager Leidy H. McConnell.

The Troy Land and Improvement Committee hired Trupp & Company of Tippecanoe City (Tipp City) to build a factory for McKinnon Dash near the corner of Pennsylvania and Olive Streets.  Some sources say that the building ran along Olive Street to near Ridge Avenue.  It was completed in the spring of 1896.  A story in an April 1898 special supplement to the Miami Union newspaper described the factory as being “of brick and form(ing) three sides of a hollow square.”  In the beginning, the building contained about 48,000 feet of floor space.  Later, another 20,000 feet was added to the structure.  In the company’s heyday, it daily manufactured about 800 leather dashboards for horse-drawn vehicles.

The Troy & Piqua branch of the Cincinnati Hamilton & Dayton Railroad ran near the plant, which was ideal for both the receipt of materials to the factory and the shipment of completed dashboard orders.

In his book TROY THE NINETEENTH CENTURY, author/historian Thomas B. Wheeler says that Troy’s population of Troy grew in the 1890s because the Troy Land Improvement Company brought the McKinnon Dash Company and other businesses to town.  People moved to Troy because there were jobs in the new and expanded factories.

In March 1913, a great flood struck Troy and the Miami Valley.  The McKinnon Dash Company sustained a significant amount of damage.  Water was estimated to be 12 feet deep inside the building.  Workers could only enter the plant through the roof.  There was damage both to factory equipment and finished dashboards.  The company lost thousands of dollars.

In the early 1900s, the automobile began to replace the horse and buggy and business slowed.  The McKinnon Dash Company did build some dashboards for automobiles, but the Troy factory never gained a market share to be prosperous.  The factory closed sometime around World War I.  (Note:  The McKinnon Dash Company did continue to exist in other parts of the United States by manufacturing other products.)

Over the next few decades, the Hobart Manufacturing Company (later named Hobart Corporation) used the McKinnon Dash Company building to house its motor plant, for its subsidiary the Troy Metal Products Company, as its commercial dishwasher plant, the factory for its 3 and 5 quart KitchenAid mixers, its Sheet Metal Department, and commercial dishwasher assembly.  For many years, the building was known as “Plant Two.”   Hobart eventually demolished the building.  The property is still part of the Hobart campus.  (Hobart is now owned by Illinois Tool Works and part of the ITW Food Equipment Group.)

The McKinnon Dash Company, once the largest producer of dashboards in the world, ceased to exist because it did not find a way to change its product from the age of the horse and buggy to the modern automobile.  It lost business and then went out of business.

For more information about the McKinnon Dash Company, visit the Troy-Miami County Public Library Local History Library at 100 West Main Street in Troy or contact The Troy Historical Society at (937) 339-5900 or by email at This email address is being protected from spambots. You need JavaScript enabled to view it..