Miami County holds many treasures, one of which is a converted barn that showcases the Ford Mustang automobile. The Gale Halderman Museum, located at 6476 St. Rt. 40 in Brandt, OH, is home to several cars, scooters, motorized bikes and an extensive camera collection owned by Halderman’s daughter, Karen Koenig. Troy Rotarians were invited to hold their October 24th meeting at the museum to learn about the history of the car and its impact on the automotive industry.

Halderman enjoyed a 40-year career with the car maker after studying lettering at the Dayton Art Institute. A classmate suggested Halderman submit some auto designs to Ford Motor Company, and the rest, they say, is history. During his career, he was tasked with designing what became the inaugural model of the 1965 Ford Mustang, a muscle car that marked the company’s most successful launch since the Model T. It took three years to bring the design to the dealer showroom. It was unveiled on April 17th at the 1965 New York World’s Fair and sold 23,000 units quickly. During the design and development period, the team started to call the model the “Cougar.” At the last minute, marketing research suggested a name change to “Mustang,” citing better acceptance of horses over felines.

Halderman worked closely with company president, Lee Iacocca, to design a car to fill an unaddressed market segment. Iacocca had to convince the CEO, Henry Ford, II, to take a chance on the concept for the Mustang. Having recently lived through the debacle that was the Edsel, the CEO was reluctant to take another risk but quietly told Halderman to “keep working on the car.” Following his time with the Mustang, Halderman worked on several other Ford products, including Mercurys, Lincolns, and some truck models. Many memories are housed in his museum, along with the 2017 version of his baby, a beautiful blue Mustang.

The museum is open by appointment only. Halderman and Koenig host several groups throughout the year, including car clubs from outside the United States. There is no charge for admission; however, donations are accepted to help “keep the lights on” for visitors to enjoy the exhibit. To learn more, or to schedule a tour, visit their Facebook page at www.facebook.com/haldermanbarn. 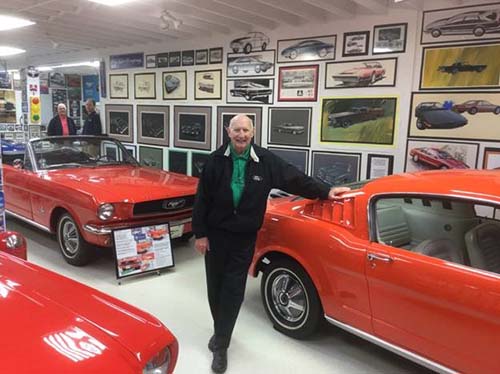 Gale Halderman at his Mustang Museum