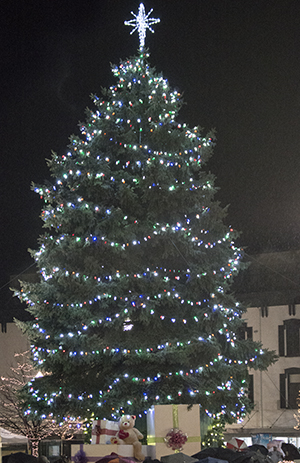 Christmas officially arrived in the heart of downtown Troy on November 27, the day after Thanksgiving. The tree on the square was lit in grand ceremony, heralding the change of the season and a month of Christmas glow in hometown Ohio.

Despite the chill and rain, hundreds of people gathered on the square to listen to Christmas music by local bands, to sample local vendors, and to visit shops that stayed open late for the occasion. Santa was also present for the evening’s festivities and sat comfortably in a little house where families, couples, and individuals lined up for hours to see him and read him their Christmas wish lists.

The 10-second countdown to lighting the tree commenced at 6:45 p.m. with significant fan fair and loud cheering that carried down the streets of the city for many blocks in every direction.

The preparations that went into bringing the event to life for the community were extensive. According to city officials, it took two days and approximately 10 city departments to secure the tree and decorate it for the event. It first arrived on the square on November 17 at around 11:15 am, where announcers from Troy Community Radio posted pictures on social media and shared the news on air as the process of placing the tree was happening. Outside help like Piqua Crane was actively involved in setting the tree this year and has faithfully partnered with Troy for this project for 50 years.

DP&L was responsible for safely stringing the 3,000 LED lights. In years past, the tree has also had ornaments. This year, because the decorations were frequently becoming tangled around the base from the December weather, the city opted to have large ornamental Christmas presents under the tree instead.

The elegant, homegrown, blue spruce is 32 feet high and was donated to the city by Roger Adams of Glendale Avenue in Troy. It was transported to its new home in the heart of town on the back of a flatbed truck. At the base, the tree is 22 feet in diameter, weighing in at a delicate 400 lbs., putting it at the low end for the general weight of most of the city’s previous Christmas trees.

Members of the community who came out to see the tree lighting were in high spirits. “We have enjoyed coming to this almost every year since our children were little,” local attorney Mark Puthoff said. “It’s a great way to bring in the Christmas season as a family.”