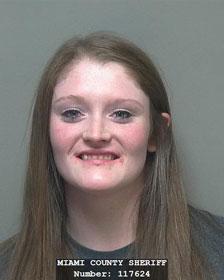 Hope Earnshaw-York told investigators of her grandfather William York Sr.’s murder that Richard Terrel repeatedly struck him in the back of the head with a metal ball bat as she and York were arguing over his “nit picking.”

William York Sr., 88, died in late May 2015 at his Tipp City home. His body was found June 3, 2015, dumped in a red sleeping bag in a Kentucky creek after relatives reported him missing a couple of days prior.

Terrel, 37, of Troy was sentenced to 15 years in prison and Earnshaw-York, 25, to three years in prison Nov. 29 for their roles in the death, abuse of the corpse and tampering with evidence to attempt to conceal the crime. Both will receive credit for 545 days served in the county jail since their arrests.

The separate sentences were held before Judge Christopher Gee in Miami County Common Pleas Court. Both Terrel and Earnshaw York along with York family members spoke before the sentences were imposed.

Investigation files at the county prosecutors’ office were opened for review following the sentencings.

Binders of reports included information on findings, interviews with both defendants and others and details such as comments Earnshaw-York made to relatives in phone calls from the county jail following their arrests June 3, 2015, in Butler Twp., Montgomery County. She and Terrel were driving William York Sr.’s missing truck.

Earnshaw-York told investigators in various interviews that the attack May 26, 2015, was in the garage of William York Sr.’s home, where she, Terrel and her young son had been staying.

She said she and her grandfather, who was called “Pop,” were moving her son’s toys into the garage where Terrel was working on his car. Earnshaw-York said her grandfather was regimented in his routine and that “hurtful” things were said in the argument such his telling Terrel to get a job.

“When Pop turned his back to Rick and grabbed my arms to make a point, Rick freaked out and started hitting him,” Earnshaw York is quoted as saying in one call June 7, 2105. She said her grandfather called for help and asked Terrel to stop before succumbing.

She told another relative she was trying to ensure the child did not see what had happened and couldn’t call police out of fear Terrel would kill her.

Reports said a marriage license for Terrel and Earnshaw-York was found in Terrel’s car, which was searched after being found sitting in York’s garage.  Terrel is described in reports both as her boyfriend and at times her husband.

Also found in the car’s search was a shopping list for cleaning items including mops, gloves, garbage bags and ammonia.

The reports and other evidence outline how the two cleaned the crime scene, wrapped the body in bedding and a sleeping bag and moved it to a storage locker off Wagner-Ford Road in Dayton. Terrel rented the storage locker May 27, 2015, according to evidence. After leaving the body, Earnshaw-York said they went to buy heroin.

Materials used in the clean up were taken to the Montgomery County Solid Waste facility for disposal with a receipt showing the cost of that transaction as $ 2.47.

The body was moved June 2, 2015, from the storage locker to Gunpowder Creek, in Boone County, Ky., and dumped off a bridge.

Evidence of a decomposing body was found both in the storage locker and the back of William York Sr.’s truck.

Terrel, who in some interviews blamed Earnshaw-York for the death, later led investigators to that location. The sleeping bag with the remains was seen in the river, and recovered.

Terrel faced up to 18 years in prison following a plea deal in which a murder indictment was dismissed and replaced with felony voluntary manslaughter. He pleaded guilty to that charge along with tampering with evidence, gross abuse of a corpse, felonious assault and two counts of receiving stolen property.

Earnshaw-York pleaded no contest and was found guilty of gross abuse of a corpse, tampering with evidence and three counts of receiving stolen property.

A lack of forensic evidence caused by a scrubbing of the crime scene and Earnshaw-York’s refusal to cooperate with prosecutors after initial statements contributed to Terrel’s plea deal, county Prosecutor Tony Kendell said.

“The judge did what he could do. This has been problematic from day one,” Kendell said of the case.

“They had uninterrupted access to the crime scene. They cleaned it with ammonia, bleach and other cleaning agents that just decimated any forensic evidence,” he said. “None of us are happy about the turn of events.”

In court, Terrel said there was nothing he could do to change what had happened. “I would just like to apologize for any actions I had in this matter,” he said.

“I want to make clear this was not some premeditated crime,” Earnshaw-York said, adding the actions were “drug fueled.”

She called herself a “coward” for not intervening and said her lack of response was out of concern for her two year old child and one she was carrying at more than seven months into pregnancy.

Among those speaking at sentencing was Earnshaw-York’s sister, Vanessa Thoma, who said her “Pop” saw the good in everyone, including Terrel.

“My family deserves to feel safe … the community and elderly need protected from him,” she said. “Rick Terrel doesn’t deserve to breathe the same air we breathe.”

Bill York Jr. told Gee he was “sickened” to be in court. He said his father was the oldest of 13 children, a World War II veteran, a former coach, a professional dog trainer and a developer, among other things. “This was a gutless act by a gutless individual,” he said.

Sharon York, Hope Earnshaw York’s mother, said both her daughter and her father in law were “vulnerable” at the time. “Both are paying a terrible price for it,” she said.