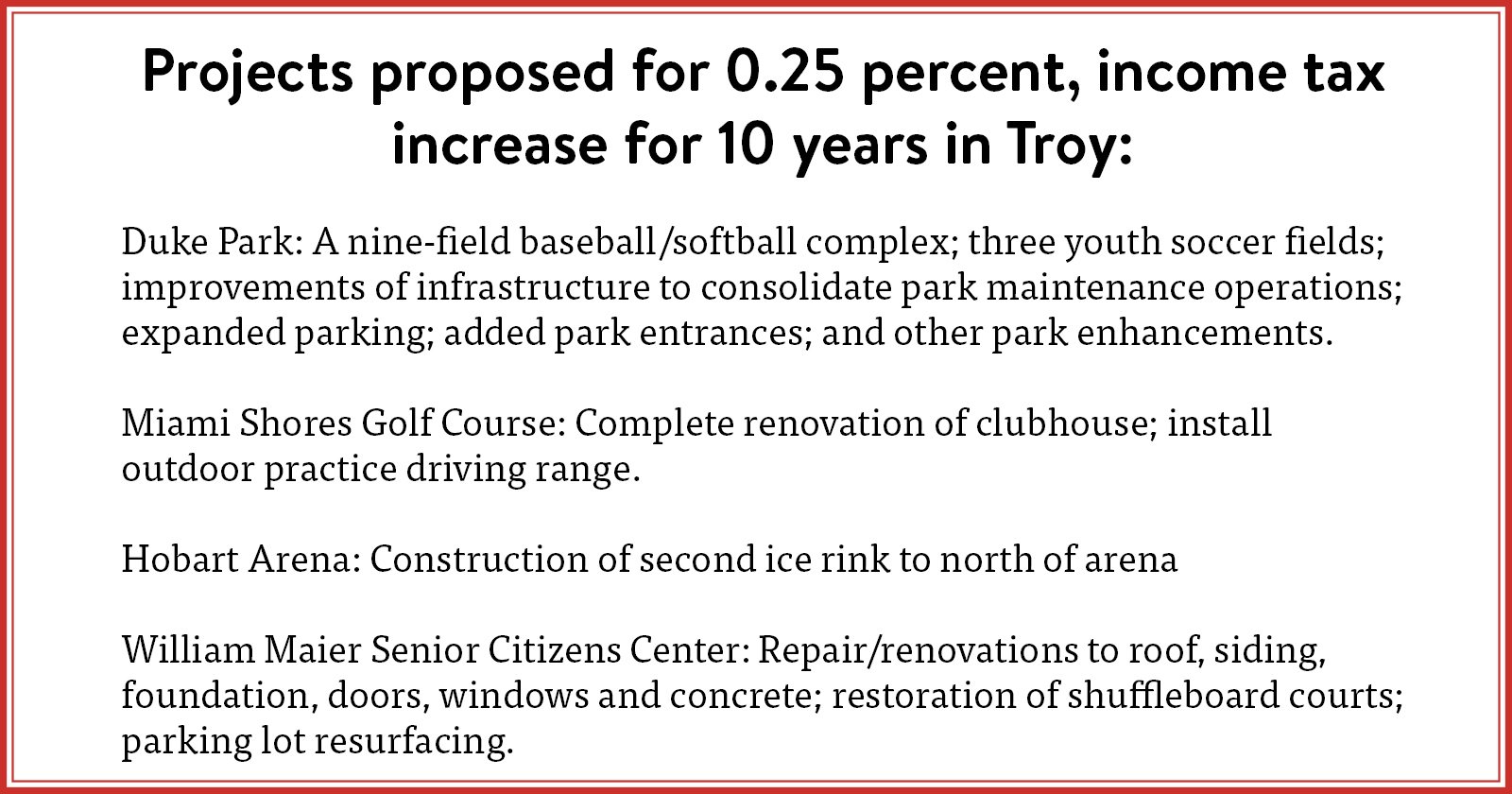 Troy City Council will be asked to place before voters in May a 0.25 percent income tax increase for 10 years to pay for a package of recreation/parks projects earlier proposed by the Operation Recreation 2020 Committee along with the addition of a second sheet of ice near Hobart Arena.

City council's recreation and parks committee will send the full council a split recommendation on the proposal.

All three committee members – Brock Heath, Robin Oda and Doug Tremblay – agreed Monday, Dec. 12, to recommend council place the tax request before voters in the May primary. The recommendation does not include an endorsement of the proposal.

Heath and Tremblay agreed to recommend the council approve the legislation as an emergency measure to help meet election filing deadlines. Oda said she was not comfortable recommending council take emergency action, meaning it would be asked to approve proposing the tax at is next meeting, Monday, Dec. 19. She said to vote without following council's regular readings process for proposed legislation appears to be "rushing."

The income tax proposal was first presented publicly Dec. 6 at a joint meeting of the city park and recreation boards. Those boards voted to recommend council place the tax question before voters.

City voters were scheduled to vote in the Nov. 8 election on a proposed 10-year, 2.01-mill property tax but council withdrew the request from the ballot at the last minute.

The request to withdraw came days after a voter notified the Miami County Board of Elections Nov. 2 of an error in a decimal point in the tax request ballot language.

The error meant the request, if approved by voters, would have raised substantially less than what the city intended the 2.01-mill request to generate.

The 2.01-mill request was designed to generate $1 million a year for 10 years for projects at Duke Park, Miami Shores Golf Course and the Senior Citizens Center.

The new proposal would generate $2.57 million a year for 10 years. The additional money, basically, would cover the cost of the second sheet of ice. The additional ice rink was studied as the city looked at options for its recent riverfront development project but was considered cost prohibitive at that time. The riverfront project included the Treasure Island Park development, the Treasure Island Marina building renovations and the Hobart Arena expansion and renovations, which are scheduled for completion early next year.

The main differences between the previous proposal and the new one are the addition of a second city ice rink that would be built north of Hobart Arena, an income tax versus property tax and a reduction in the amount of private money that would need to be raised. The $4 million previously targeted for private contributions by the Operation Recreation Committee has been reduced to around $1.5 million. However, the committee will work to raise as much as it can, and possibly allow the city to stop collecting the special income tax before the 10 years expires, said Patrick Titterington, city service and safety director.

Councilman Brock Heath encouraged the Operation Recreation Committee to pursue as many private dollars as possible. "The committee has committed to raising as much money as we can," said Bobby Phillips, a council member and also president of the Operation Recreation Committee. He said the committee has grown since the first tax proposal to 13 organizations to now include the local skating club and hockey programs.

During the discussion, Oda questioned the addition of the second ice rink to the new request and said she was struggling with the request for a recommendation. "It's a hard hit for citizens," she said.

Oda asked if the city had discussed with the city schools and the Miami County Park District their plans to approach voters for support in coming years. "That hasn't come into the discussion. Where do we draw the line?" she asked.

Titterington answered, "It is not our discussion. Those are not city issues."

Titterington said the mayor and Kathy Slack of the Troy Skating Club would be lead spokespeople for the effort while the Operation Recreation group would provide volunteers, grassroots coordination and marketing efforts.

Before making its recommendation Monday, the committee heard from representatives of some Operation Recreation committee members including the Trojan Soccer Club, Junior Hockey, Senior Citizens Center and Troy Skating Club. The representatives talked of their particular organizations' needs as well as the financial impact the added recreation facilities could have on the community including its hotels, restaurants and other businesses.

"What we are talking about is going to be huge for Troy," Heath said.