Rotarians Host "Triumph of Flight" Board 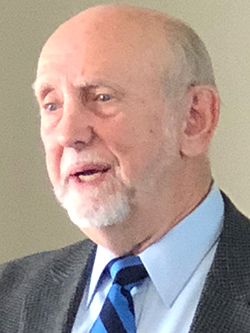 The Miami Valley has a long and rich history in the aviation industry, dating back to when the Wright brothers, Orville (1871-1948) and Wilbur (1867-1912), first created a flying machine. Today, the Wright Image Group (WIG) hopes to memorialize the area’s contribution to aviation by building a national monument that will be located at the southwest section of the I-70/75 interchange. Troy Rotarians heard about the project, Triumph of Flight, during their weekly meeting on February 6th.

Wright Image Group board of directors Joe Lehman, Byron Kentner, Bill Koop, joined Curt Nelson in presenting the plan for the monument. The WIG was incorporated in April, 2005 and is a 501(c)(3) organization. The purpose of the nonprofit is to build a national monument to flight that will commemorate the Wright brothers’ legacy of inventing the airplane and the area’s continued involvement in flight and aerospace efforts. The proposed monument will feature a replica of the 1905 Wright Flyer III aircraft. It will be 270 feet tall with a 144-foot wingspan. Several other elements include a 10,000 square foot science, technology, engineering, and mathematics (STEM) education building, a plaza and park, and a reflecting pool.

The project is estimated to cost $21 million. The WIG has raised 10 percent of the funds to date. Once completed, the monument will bring international awareness to the Miami Valley’s contributions to the invention of flight, increase tourism, attract new businesses, and expand aerospace research. To learn more about WIG, to make a contribution, or to volunteer, visit www.triumphofflight.org.