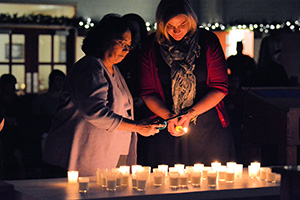 Sherry Nolan knows the pain associated with losing a child to homicide.

She shared some of her thoughts about how to go on after such devastating personal loss during this year’s Candlelight Service of Remembrance and Hope on Dec. 10 at the First Lutheran Church of Troy.

More than 50 people, including those who have lost a loved one to homicide or other forms of violence along with police and prosecutors, participated in the service coordinated by the Miami County Victim Witness Program.

Following the 2001 murder of her daughter and unborn grandchild in an act of domestic violence, Nolan found herself involved in the Parents of Murdered Children organization.

The group started in Cincinnati in 1978 and now has more than 60 chapters nationwide. The goal is to support and help people rebuild their lives, Nolan said.

The organization, she said, “Is one no one wants to be a member of yet also one (that) one can’t live without.”

Noting she has been asked many times how one can go on after losing a child, Nolan offered the following thoughts:

- “Learn how to live with the hurt rather than becoming consumed by it.”

- “Be kind and gentle to yourself and figure out what you should do. Balance it against what you are capable of doing, and then compromise.

-  “Forgive yourself for living when your loved one has died. Talking about your loved one will not increase the level of sadness. Instead, bringing the name of a loved one into a conversation is a treasured gift.”

Nolan said it is important to remember that grief changes the rules.

“Too often we underestimate the power of a touch, a smile, a kind word, a listening ear, an honest compliment or the smallest act of caring, all which have the potential to turn a life around,” she said. “Just be there to listen, it is the greatest gift to give to any survivor … Grief is nature’s way of healing a broken heart.”

Kendell said those who work in the criminal justice system such as police, prosecutors and victim advocates see their work not as a job, but as a calling.

They realize, he said, “the penalties allowed … pale in comparison to any loss you have suffered.”

Duchak said the courage of families and friends of victims inspire police who are charged with investigating the crimes. “Your strength gives all of us in law enforcement the ability to keep doing what we do,” he said.