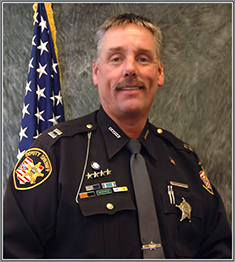 Duchak, who was Cox’s chief deputy the past several years, was sworn in following the commissioners’ vote. Tony Kendell, county prosecutor, administered the oath of office.

Duchak, a Troy resident, won the sheriff’s race to replace Cox in the Nov. 8 general election.

Cox, 71, was in his seventh, four-year term and had planned to retire at year’s end.

Duchak’s appointment was effective Nov. 15. A somber Duchak said he was sorry the swearing in “had to be under these circumstances, but I appreciate all of the support.”

His wife, Sheri, accompanied him. Also attending the swearing in were members of the sheriff’s department and the prosecutor’s office.

Cox was a Republican. Duchak also ran as a Republican. He won a four-way race in the primary before facing independent Joe Mahan in the general election earlier this month.

In a related matter, the commissioners Nov. 17 approved the public official bonds for the acting sheriff and then Duchak as the elected sheriff for the term Jan. 2, 2017, through Jan. 3, 2021.