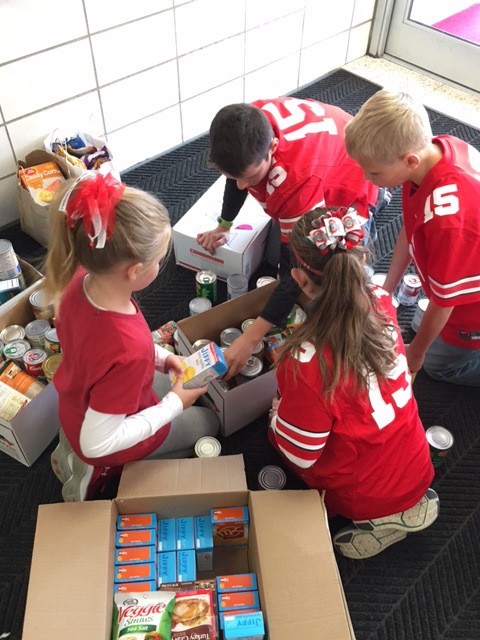 The Student Counsel at Hook Elementary School hosted their first ever student-led food drive over the last couple weeks. With an emphasis on meeting needs in the community, children at Hook rallied to provide everything from Thanksgiving dinner items to care packages of toiletries that were delivered to local organizations and families. Items collected were distributed on Wednesday, November 23 to the Lincoln Center, the Franklin House, and individual homes.

According to teacher and Student Counsel advisor Greg Gustin, not only was the experience “team building” it also inspired the children to use their time and energy to serve their community. This is year 7 for Gustin as a language arts and sciences teacher but his first year as the counsel advisor. He was enthusiastic to report that the entire event was student run, everything from scheduling the collection to making posters and announcements. “It was the biggest response we have ever had to a program like this,” Gustin said. “Participation snowballed after the first day; by the third day at least 100 kids were bringing in food.”

There were extra incentives, of course. Prizes were awarded daily to the children who brought in the most food items for the drive. Their families often helped. Pizza and ice cream were awarded to the top winning student and three of their friends. Second and third place winners received a book of their choice from the book fair or lunch with their favorite teacher. The competition spurred excitement as the children participated right up to the day before their Thanksgiving break.

Hook Elementary School Principal Penny Johnson expressed pride and excitement at the overwhelmingly positive responses of the students and their families for this outreach. She remarked on the benevolent nature that manifests itself when children are prompted to give. “These children are learning how to take care of their community,” Johnson said. “For a small school, we have a lot of people that want to care for others. It was such a beautiful thing to watch the children come up with an idea, schedule the drive, run it, and then donate to see people in their community encouraged and blessed during the holidays.” According to Johnson and Gustin, even the idea of the food drive was entirely generated by their students.

More boxes of food were collected than Gustin was able to count. Student council members worked alongside him to pack the boxes before he made the deliveries personally. “The boxes we packed were bigger than the students could carry,” Gustin said. “We collected so much food. It was amazing.”

According to Johnson, the food drive and other student run projects demonstrate a value that the Hook Elementary School administration has long taught. Children may wrestle with the belief that they are “just a kid,” thinking “what can I do?” What Johnson and teachers at Hook desire to instill in their students is that they can still make a difference. “It doesn’t matter how young or how small you are,” Johnson said. “There is something every person can do that matters and can make the world a better place.”