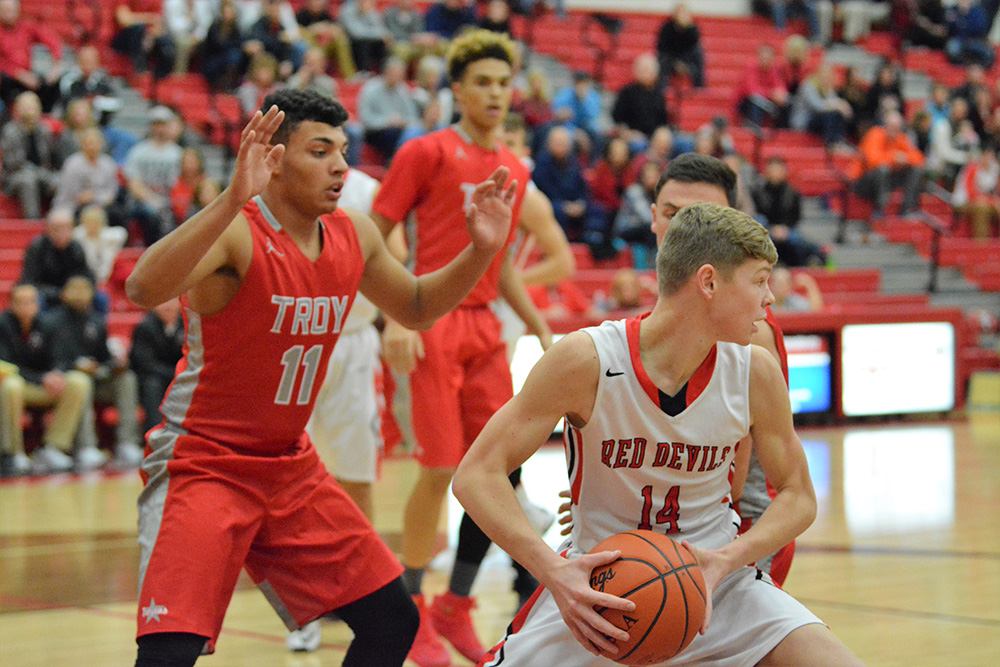 Tippecanoe coach Joel Visser knew that when his team could put it all together on both sides of the ball, the Red Devils would contend and challenge against most of the teams on their schedule.

Last week, the Red Devils did just that.

Despite a valiant effort in the fourth quarter from Troy to make it a game, the Red Devils built a 24-point lead in the third quarter and make it stand up, as Tippecanoe knocked off the Trojans 70-56 to win their first game of the season.

Tippecanoe, who has played three of their losses within single digits, used a variety of three-point shooting, and solid defense which led to points to get to 1-3 in the GWOC American North. With the loss, Troy falls to 1-3 overall and has the same record in the league.

Tipp jumped out in front early 9-4 as they used a three from Caiden Smith to highlight the early run before Ryan McClurg closed the gap with a three with under 1:30 left in the first period. McClurg and Tippecanoe freshman Ben Sauls controlled the final minute of the quarter as they each hit two three’s for their team, as Tipp led 17-12 after eight minutes.

McClurg hit another three to start the second period and the Trojans trailed 20-17 early in the period. That is when Tipp took control of the game.

Josh Wildermuth started the run with a short jumper, as they put together a 7-0 run capped by another three from Smith. Zach Reichelderfer temporarily stopped the bleeding with an offensive rebound score for the Trojans, but the final two minutes, the Red Devils took a ten point game and it exploded out to 36-19 at the half thanks to five points from Smith, along with scores from Sauls and Adam Grieshop.

Smith’s three at the halftime buzzer seemed to continue the momentum into the second half, as Grieshop and Smith scored quickly to push their lead out to 21 points. Everytime the Trojans had a run in the third period, Tipp would answer with a big three.

Leading by 23 in the closing minute of the third period, Tipp watched as Troy quickly evaporated the lead down to 16 with a big run to close the quarter. Hayden Kotwica hit a pair of free throws and added a driving layup with two seconds left in the quarter, and when Tipp inbounded the ball, Kotwica intercepted it and threw up an off balanced shot from deep at the buzzer, hitting the three and sending the Trojans into the fourth quarter trailing 52-36.

The teams traded baskets in the fourth until Troy scored five consecutive points with 1:44 left and cut the lead to 59-50. The Red Devils then hit 7-8 free throws down the stretch as they earned the win.

Leading the way for Tipp was Smith with 23 points, Bonifas added 15, Sauls had 12 and Grieshop 11. Troy was led by McClurg with 21 and Reichelderfer added 14.

Tipp now plays in the Piqua Holiday Tournament this week heading into the New Years weekend.