The Troy Gymnastics team accomplished the biggest goal of the season on Saturday. They captured the Southwest Ohio District championship title and earned the long awaited trip to state. Troy competed in the morning session and knew they did well, but also were aware anything could happen at districts. The Trojans had to wait until the second session was over before they knew for certain they qualified. After scores were tallied, they earned a 139.15 which was more than enough to beat their closest competitor, Centerville, who came in 2nd with a 135.9. Both teams will compete at the state meet on Friday at Hilliard Bradley High School.

Not only did Troy qualify as a team, they are also sending four individuals as well. Out of approximately 100 girls competing, only the top 6 in each event move on to state competition. Troy will be sending Claire Buerger and Grace Dwyer to compete on vault, Minori Nakada on bars, Troy Christian freshman Abby Baker on beam and Nakada and Buerger on floor. Additionally, Nakada and Buerger will compete in the all-around competition due to their 2nd and 4th place finishes. Nakada, Buerger, Baker and Dwyer will compete again on Saturday in Hilliard for the individual portion of the state meet. 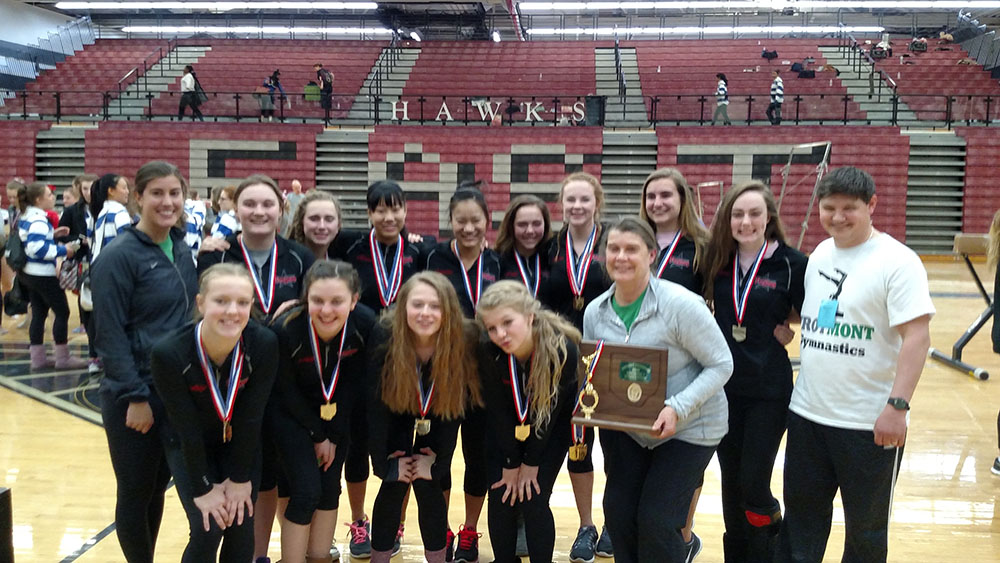 Troy started the competition on bars with Nakada, Dwyer, Buerger, Baker, Lizzie Deal and Miranda Silcott competing. Competition day jitters appeared to be at work as several girls posted scores lower than normal. Nakada had a very solid routine and scored an 8.825 which earned her second place in the district and a spot at state. Scores for Baker (7.625), Buerger (8.175) and Dwyer (8.3) counted towards the team score in this event as well.

By the time the Trojans started beam, they seemed to relax and get their rhythm back, despite having to adjust who competed. Kayla Coate normally competes beam, but an injury during practice last week sidelined her for the district meet. The coaches decided to have Lanie Hagen compete and she came through for the Trojans with an amazingly solid routine that earned an 8.650 and a district award for finishing an event in the top ten. Buerger also got an 8.650, Nakada an 8.675 and Dwyer an 8.250. Deal’s 8.70 earned her a spot on the All District team with an 8th place finish. Freshman Abby Baker seemed completely unfazed by the pressure of the meet and performed a nearly flawless routine earning her a season high 8.75. Little did she know at the time, her score would earn her a 5th place finish and a trip to the state meet to compete beam.

Troy dominated everyone with their spot on floor routines. Baker, Dwyer, Deal, Nakada and Buerger competed. Dwyer and Deal scored high marks with their routines (8.825 and 8.850 respectively) which earned them 16th and 15th place finishes. Two Trojans hit the elusive 9.0+ mark which is always highly celebrated. Nakada got a 9.075 and a third place finish which earned her another state spot. In a career best routine, judges awarded Buerger a 9.250. This finish earned her a district champ title and a trip to state to compete floor.

Vault was the last event for the Trojans and they went into it with a lot of confidence after their strong showing on floor. Silcott and Baker both scored 8.0 with their very solid handspring vaults. Deal contributed an 8.7 with a beautiful handspring 1 ½ which earned her a 12th place finish. Nakada, Buerger and Dwyer competed a difficult tsukahara vault. Nakada got an 8.775 and an 8th place finish. Buerger got an 8.975 and a 4th place finish for another state spot. Dwyer’s vault (9.0) earned her a 3rd place finish and a state spot as well. As her teammates surrounded her in a giant hug, which brought tears to the eyes of many, it was a great end to a memorable day.