It was less than a week since the Troy girls’ bowling team defeated Beavercreek 3-1 in Columbus, to win the 2016 OHSAA state bowling championship. The gleam in the eyes of Rachel Darrow and Jenna Stone was still there, and for good reason.

Darrow is a senior who finished her prep career in the best way possible, with gold around her neck. Stone however is just a sophomore, and even with two more years to cause havoc to her opponents, she also was still beaming about what she and her teammates had just accomplished. 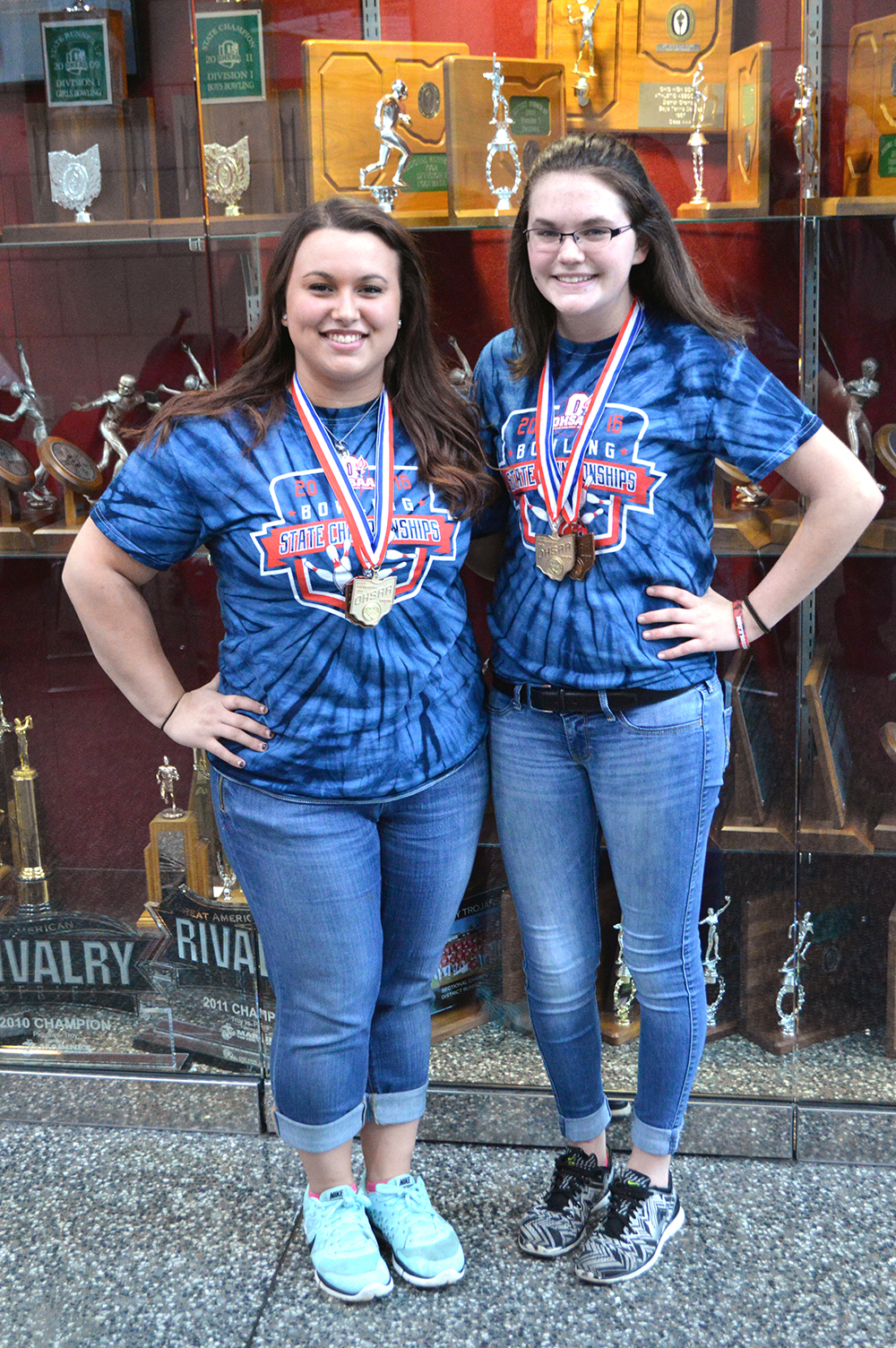 “It was really exciting because we went last year so we know what we were getting into,” said Darrow, who was named first-team all-Ohio. “The atmosphere was really good because we love tournaments, it’s something we are really passionate about.”

“There was something in us differently this time, we were more confident this year because we had success in our tournaments we were in this year.”

Troy advanced through the prelims to qualify to the final eight teams, where the Trojans won their first two matches to set up a state championship against Beavercreek, and leading 2 games to 1, Troy had their back against the wall in game four, and tried to pull off a comeback so they would not have to go to a deciding fifth game.

Trailing going to the ninth frame, Darrow threw a strike to set up the fateful tenth frame.

“Even before my ninth frame, I was talking to one of the girls on the team to see if it was even possible to even win the game,” Darrow said. “We were struggling and they were striking early and playing well.”

“When I went up, I didn’t expect we could win and we would just go onto the next match. Once I struck, I came back and we thought we could do it. It was one of the highlights of my senior year. Another highlight was placing first at pre-GWOC tournament with a 689 series beating both the boys and girls. But this is above that.”

Being the only senior didn’t phase Darrow, as she is used to being able to handle those types of situations.

“I am kind of used to the pressure, because since my freshman year, I have been the anchor bowler,” she said. “It is something I enjoy, something I look forward to. Knowing I had Jenna to back me up in case I wasn’t on my game, and at the end of the day I wasn’t, so I am glad she took over.”

Stone, who also was named first-team all-Ohio, didn’t just take over the tenth frame, she owned it.

“I knew we had a chance,” Stone said. “After I threw the first one, I came back and didn’t look at my score, I didn’t even want to know what I had to have. Second one, I threw another strike and it got really quiet and nerve-racking.”

“I was really nervous when I threw the third one, and when I turned around, everyone was surrounding me and crying.”

There are seven returning bowlers next season, including Stone who thinks this success will be a motivator for those bowlers looking to come back next year and repeat.

“We will go into districts knowing that we can go that far,” Stone said. “We will have a few people step up in her (Rachel’s) spot, and get their averages up and practice to become a bowler like her.”

“Usually we come out on Friday night’s and practice, and I am usually here every day to practice,” Stone said, referring to what the team has to do in the off-season to improve.

“I came out this year and practice as hard as I could and kept a good attitude,” Stone said of her consistency this season. Darrow also reflected on her success.

“I tried to improve my spares and I feel I have matured a lot since my freshman and sophomore years,” she said. “Now I have grown into it and just relaxed.”

Darrow is headed to Youngstown State to study physical therapy and athletic training and bowl for the Penguins.