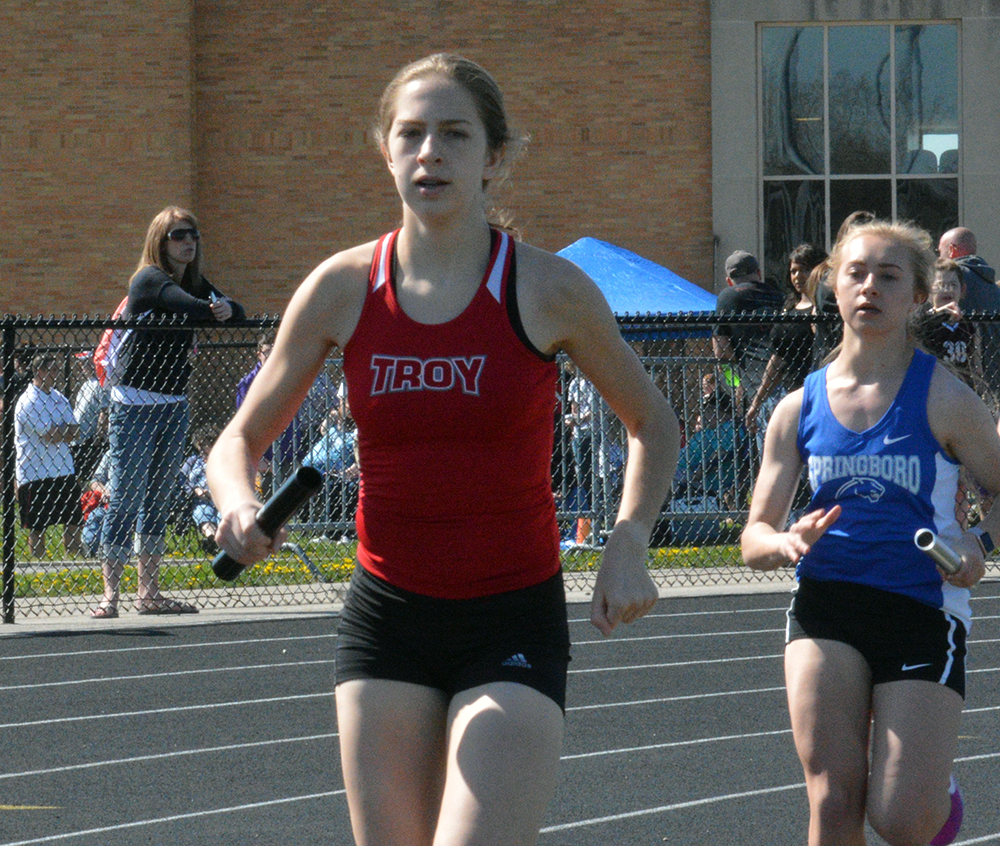 It was a record setting day at Vandalia Butler as the Butler Invitational, as both Tippecanoe and Troy competed in the 16-team event on a sunny day in Vandalia.

The Troy girls finished second overall in the event with 98.5 points, while Tippecanoe finished sixth. On the mens side, Troy placed third with 68.5 points, with Tipp placing tied with Sidney for tenth place with 27 points.

Troy senior Kelsey Walters set the tone with a school-record setting performance by throwing the shotput 40’6.5” to claim the title. Teammate Alaura Holycross was second at 37’6.75”.

Carrisa Ferrall from Tippecanoe finished fourth in the discus with a toss of 88’4”, and Troy’s Amanda Setser was seventh (83’5”).

In the high jump, Daisa Cole of Troy placed fourth, while in the long jump, Troy’s Annah Stanley was fourth, Sammie Rowland from Tippecanoe placed fifth and Kayla Hemm of Troy finished seventh.

Also in the field events, Christine Moser placed sixth in the pole vault.

The running events also saw a lot of success from the local runners. Ashley Barr from Troy was fifth in the 100 dash (13.27), while in the 200 dash, Celina Courts (Troy) placed third with a time of 26.31.The 400 dash saw Tippecanoe freshman Kaili Titley finish fifth with a time of 1:02.27, while in the 800 run, Troy sophomore Morgan Gigandet finished second with a time of 2:22.96, with Tipp’s Katie Taylor finishing fifth overall.

Gigandet came back in the 1500 run, and won the event with a time of 4:45.23, with teammate Olivia Tyre finishing fourth and Tipp’s Taylor fifth. In the other distance race, Troy freshman Kate Pence was third overall, and the Tippecanoe duo of Jillian Brown finishing seventh and Caley Dehass eighth.

In the 4x4, Tipp finished fourth with Troy seventh, and in the 4x8, it was Troy battling to finish second overall and Tippecanoe was sixth.

Taylor Prall finished fourth overall in the 100 hurdles, and in the 300 hurdles, it was Troy’s Caitlyn Cusick placing fifth and Tori Livesay placing eighth.

*The mens field events also had some local placers, as Troy senior Luke Robinson finished sixth overall in the high jump, with the Trojans freshman Nick Mittlestadt finishing seventh. In the long jump, Troy’s Hayata Nagata earned an eighth place finish to earn the Trojans a point, and in the pole vault, Joe Dippold of Troy placed sixth with a leap of 12’9” and Tippecanoe freshman Mason Doll was seventh at 11’3”.

Travis Hall a junior at Troy, duplicated the performance of Walters on the girls side, by winning the boys shot put with a toss of 49’10”, while teammate Christopher Linville was fourth. In the discus, Kameron Block placed eighth for Troy.

Over in the running events, Jayden Culp-Bishop from Troy finished sixth in the 100 dash with a time of 11.54, and improved to fourth overall in the 200 dash with a finish of 22.61. In the 400, Tippecanoe junior Casey Abney finished at 53.53, good enough for seventh overall.

Mitchell Poynter had no trouble winning the 3200 meter run for Tippecanoe with a time of 9:27.38, which set a new Butler Invitational record. Troy senior Stephen Jones was second overall with a 9:38.51. Tipp’s Jordan Brown placed eighth overall in the event.

Finally in the 110 hurdles, Troy’s Zach Boyer placed second with a 15.07, and followed that up with a fourth place finish in the 300 hurdles.