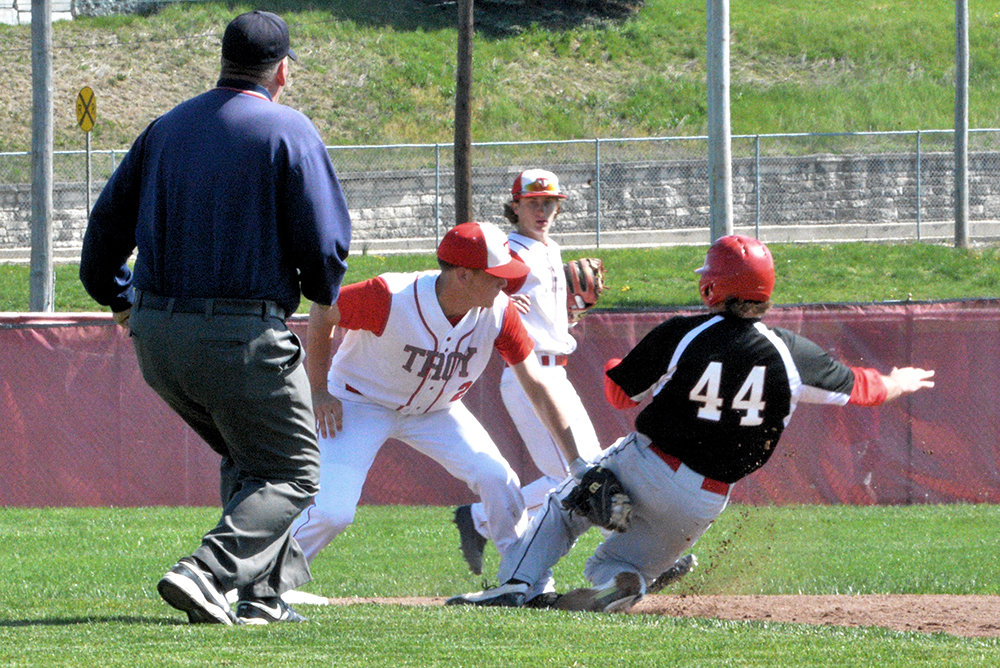 For the first three innings, the Troy baseball team set the tone with four runs against visiting Tippecanoe on a chilly Saturday morning. Just that quick, the Red Devils dominated the next three innings to take control of the game, and knock off the Trojans 8-4 in a non-conference baseball game at Market Street Field in Troy.

With the win, Tipp ran their record to 12-4 overall including their tenth consecutive win on the season. Troy falls to 8-7 with the loss.

Tippecanoe started off the scoring in the opening inning, as with two outs, Aaron Hughes reached on an error, stole second and came into score when Justyn Eichbaum drove a single through to put the visitors up 1-0.

The Red Devils came back in the second with a walk to Bradley Calhoun and a following single for Trevor Staggs but the next two batters were retired by Troy’s Hayden Kotwica to keep the deficit at one run.

In the bottom of the second, the Trojans took the lead.

With one out, Jake Daniel reached on an error, Troy Moore then picked up an infield single, and Alex Riedel drove in Daniel with a single to tie the game at one. Drake McDonagh also reached on another Tipp error which allowed Moore to score and give the Trojans a 2-1 lead.

An inning later, the Trojans added to their lead when Brandon Emery reached on a walk, moved up on a wild pitch, and Jared Bair doubled to have runners at second and third. Consecutive sacrifice flies from Austin Barney and Daniel drove in two runs, and the Trojans saw their lead increase to 4-1.

From there, it was all Tipp City, as they fought back starting in the fourth inning.

An inning later, the Red Devils put the game away. Justyn Eichbaum led off the fifth with a homerun into the left field bullpen to give Tippecanoe their eventual game winner. Gotthardt then singled, Bradley Calhoun then reached on a fielders choice and Staggs drove in pinch runner Clay Barhorst with a single. Josh Riebe added a single and a hit from Cole Barhorst loaded the bases. Two runs then scored on a fielders choice by Kraska and ensuing error from Troy to put the Red Devils in command 8-4.

Calhoun picked up the win for the Red Devils, while Hayden Kotwica took the loss for the Trojans.