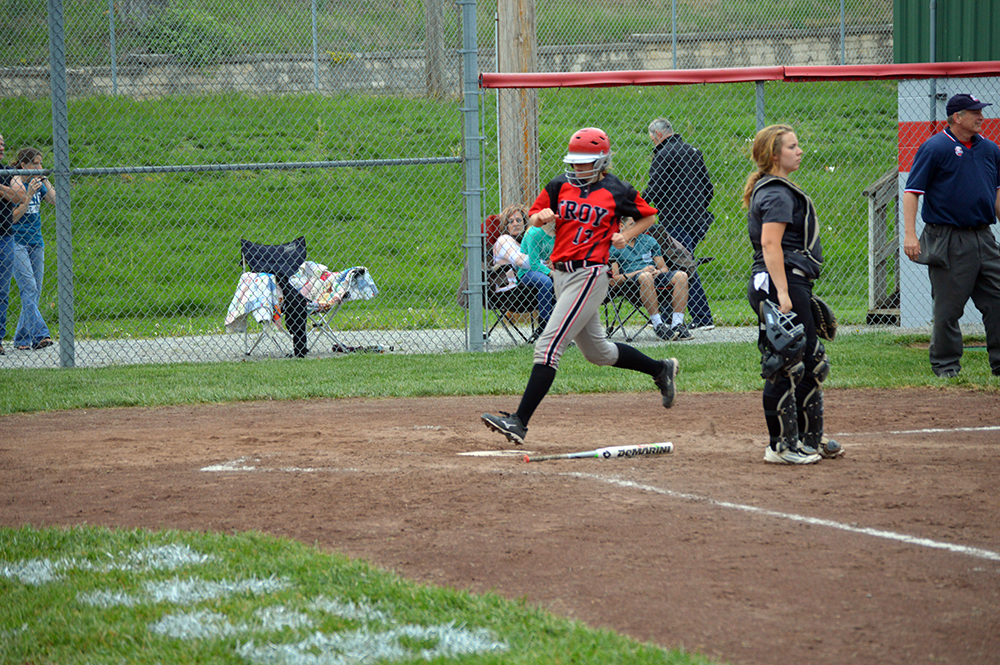 Mother Nature struck again, but this time, the Troy softball team didn’t let her detour them for a big victory.

Natalie Henson launched a homerun in the bottom of the sixth inning to give the Trojans a 10-run lead, ending the game with a run-rule victory over Sidney in the second game of their season series.

“It was Senior Night, plus we are in the thick of things to play for the league title,” said Troy coach Dan Cain. “Our goal was to win first, and our secondary goal was to get all of the seniors in. We finished the game with seven seniors on the field

“Our defense was solid and Henson pitched well, a good complete game,” Cain said. “We didn’t have any errors in the field, and we dealt with the delay well to get through senior night. The girls were relaxed and it was nice to come out and run rule them for the second consecutive night.”

Troy scored twice in the second inning as Brooke Bieler led off with a single, Hannah Wright walked and both were moved up on a sacrifice. Camryn Moeller then scored a run with a hit.

Six more runs crossed the plate in the third. Savannah Nelson doubled, Henson reached on an error and Bieler walked. Both Wright and Poling were hit by pitches, and Sara Goodwin tripled in three runs with the big hit of the inning. Moeller reached on an error which allowed Goodwin to score to put the game in hand for the Trojans.

Troy added two runs in the fourth, as Nelson reached on an error and later Henson drove her in with a single. Bieler also singled and later in the inning the second run came in on a passed ball.

Nelson, Henson and Bieler all had two hits, while Henson also pitched a complete game with three stikeouts.

*On Monday, Troy knocked off Sidney 10-0, as sophomore Hallie Snyder pitched a no-hitter for the Trojans, striking out three.

“We played solid defense also in that game,” Cain said. “They had one good line drive to right field on one hop and Goodwin threw out the runner at first.”

Troy hit four homeruns, led by Lauryn Rutan with two, and one each for Henson and Nelson, who hit a three-run homerun.

Rutan and Moeller each had three hits for Troy, while Nelson and Henson each added two.

The GWOC title came down to this past Monday and yesterday, as the Trojans battled Piqua who are both 7-1 overall in the league. A split would have given both teams a share of the league title, and if Greenville swept Sidney it would be a three-way tie. A sweep by either Troy or Piqua gave the winner the title outright.

Baseball- The Trojans defeated Sidney in a pair of divisional games last week 11-1 and 5-4.

Also last week, Troy lost to Fairborn in a late scheduled game 5-2, then dominated the Northridge Polar Bears 17-0 in a non-league contest.

In their 11-1 win over Sidney, Peck earned the win for the Trojans as Troy scored in every inning, building a 6-0 lead after three innings, then wrapping up the win after a five-inning run rule.

*Troy also stunned Sidney in their second game with three runs in the bottom of the seventh inning for a walk-off 5-4 victory over the Jackets. Jared Bair got the win for the Trojans.