Heading into the last week of the regular season, the Troy baseball team was hoping to get some momentum heading into the sectional tournament. The Trojans pulled off two big wins over Piqua in a pair of GWOC North games, to secure second place in the division. Following a 2-0 win last week in the first of their two games, the Trojans came back to finish off the Indians 8-1.

Both pitchers were on top of their games to begin the contest, as Piqua’s Derek Hite and Troy’s Jared Bair struck out five of the first six outs in the game before the Trojans broke through in the second inning.

Austin Barney led off the second with a single, was moved to second on a sacrifice and scored when Alex Riedel singled, giving the Trojans a 1-0 lead. Troy tried to add to their lead by loading the bases in the same inning, but Hite escaped by retiring Brandon Emery to leave the bases full.

In the third, the Trojans added to their lead. Troy Moore doubled to lead off the inning, and came into score when the next batter Bair lined a double to make it 2-0. Hite bowed his back by retiring the next three batters and left Bair in scoring position.

Piqua threatened in the third when they loaded the bases against Bair, but the Troy pitcher induced his opposite number to ground out to end the threat.

The fifth inning was a scoring inning for Troy, as Emery walked to lead off, stole second and moved up on a sacrifice. With two outs, Barney knocked in Emery to make it 3-0. They made it 4-0 an inning later when Riedel singled, and two outs later, Joe McGillivary reached on an error allowing Riedel to score, pushing the Trojans lead to 4-0. 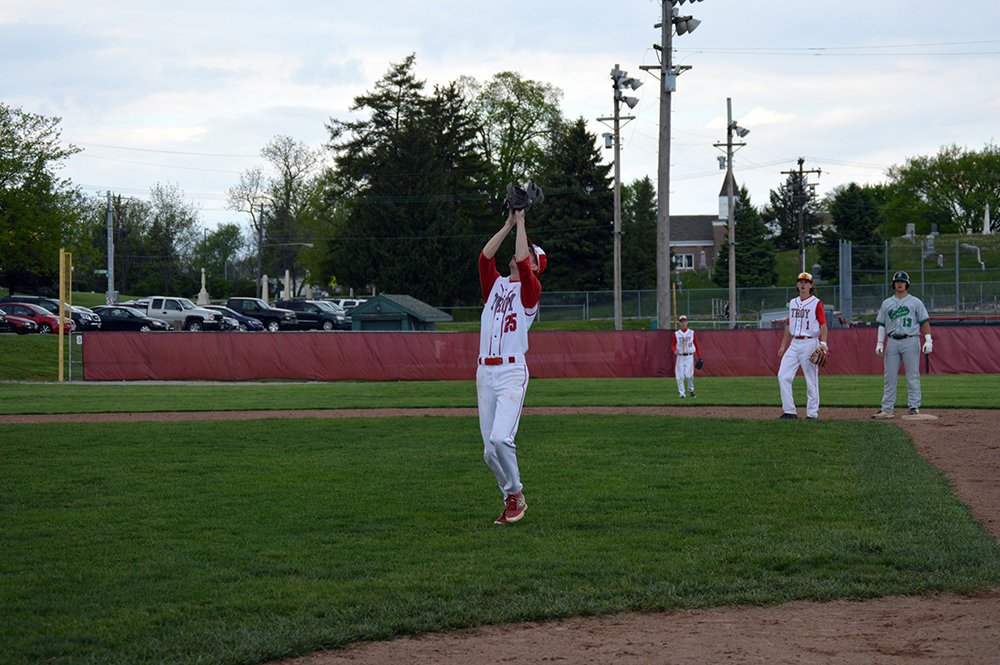 After Piqua scored in the bottom of the sixth, the Trojans ended any speculation when they plated four runs in their final at bat.

Emery led off with a walk, Moore doubled and an error allowed Emery to score. Bair was hit by a pitch and Barney reached on a fielders’ choice to score Moore. Daniel added a two-run double later in the inning, putting the game out of reach.

*Troy Softball- The Trojans softball team earned a share of the GWOC North title and finished in a three-way tie with Piqua and Greenville after splitting with the Indians last week. Piqua threw a shutout against the Trojans last Monday, then Troy recovered the following day with a 12-10 slugfest win over Piqua. With the second win, Troy finishes 8-2 in the North, the same records with Piqua and Greenville for the league co-championship.