Hockey had been a part of Prestyn Hoefler’s life for a very long time. The Troy senior member of the Trojans hockey team is gearing up for what he hopes will be another solid year for the squad as they take to the ice at Hobart Arena this winter. 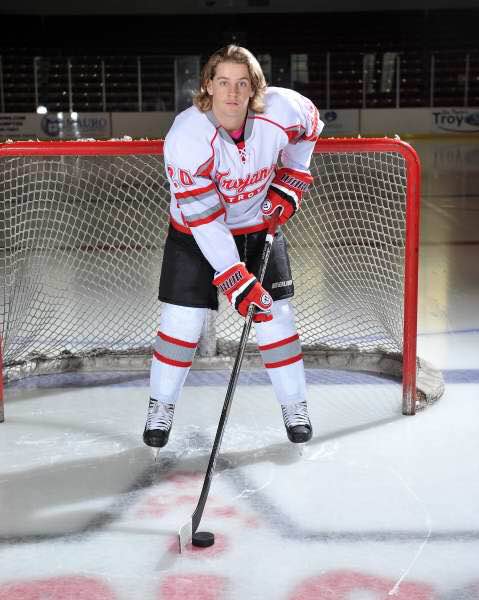 While the team has seen recent success, he knows that with the loss of some talented seniors, the Trojans hope to weather the storm and put together another good season.

“This year will definitely be a rough start because we have so many young players that don’t know the system we run,” he said. “We will get there and will try our best and give it our all. We obviously have the same goal as last year, as we want to win our division.”

“We did win the division last year, and we get to add a banner to Hobart Arena. As for individual goals for the season, I am going to try to be a part of the 100 point club.”

Hoefler is only 10 points from 100 for his career, and he is hoping to not only reach that plateau, but he also wants to earn first-team all-league again, and be selected to the senior all-star game.

“We want to be Ohio’s Team of the Week again,” he added, also stating he wants to also have a winning record.

Hoefler began his career at a very young game and while the sport constantly battles to gain it’s just due, he will always love the sport that he fell in love with thanks to a friend.

“I started playing the sport because of a very close family friend Danny Bates, he was and still is a role model to me,” Hoefler said. “He was always doing something that had hockey involved in it, so I kept watching him and decided to try it out. I fell in love with this amazing sport.”

“I would be over at the house and Danny would be outside shooting pucks, and he game me tips and pointers and as I got older, the game got more competitive, and let me tell you the hockey family is the best family out there.”

Hoefler also loves that he has influenced kids to love the sport the same way.

“I also love playing for the fans and having a fan base that always pushes me and always having my family, girlfriend and best friends in the stands cheering us on” he said.

Between traveling down to the South Metro, along with drop-ins at Hobart and pick-up games in the summer, Hoefler stays active trying to get better for the season.

“We also had a camp for four days and after camp we usually get around four summer games against other high school teams,” he said. “Even though there is not too much to offer around here, I try to find as many things as possible to get more ice time to improve my skills.”

Hoefler has enjoyed some highlights during his time with the Trojans, including his freshman year when the Trojans won the Frozen Creek Tournament and the Mayors Cup.
“My favorite highlight as a team was in the 2015-16 season when we clinched our division beating Talawanda 4-3,” Hoefler said. “That was an amazing night as a team. The locker room was a little quiet before the game but after the game, it was far from quiet.”

“Also on Senior Night, we had so many students being loud smacking the glass and yelling at the other team.”

Hoefler was honored last season with first-team all-league and received the Coaches Award. During the season, he made the Trojans Hockey “Top Tens” for goals in a season, assists in a season, points in a season and best plus/minus rating for the season.

While he is planning to major in sports management, he is uncertain about his hockey future.

“I don’t have any plans yet but I would love to take it to the next level after high school,” Hoefler said. “I would love to continue to play as long as I can.”