Midway through the third quarter, the Troy football team had a comfortable 27-point lead over Cincinnati Anderson in the opening round of the OHSAA state football playoffs. In most situations, a lead that large would be insurmountable, especially when a #1 seed battles a #8. 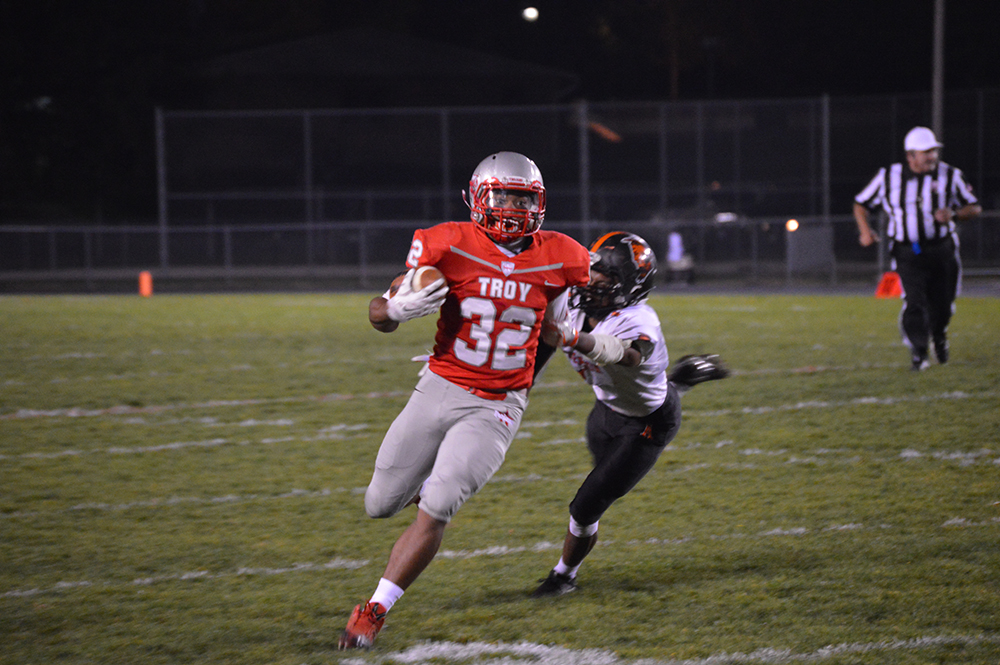 But one thing they learned that with Jay Volpenhein under center for Anderson this game was far from a normal situation.

The junior quarterback threw for nearly 500 yards and had his team six yards from the potential winning touchdown late in the game, but the Trojans defense stopped his run on fourth down and the host Troy squad have advanced to the second round of the playoffs this week with a 41-35 thriller over the Redskins.

While Volpenhein was slinging the ball all over the field, the Trojans relied heavily on the legs of Josh Browder, as the Troy running back did it all to help build the lead for the home squad. Browder ran for just shy of 250 yards, rushing for three touchdowns and catching two more in the Troy win.

After stopping the Redskins on their opening drive, Browder went to work immediately, as he broke loose down the visiting sidelines for a 77-yard touchdown run with just under two minutes gone in the opening period, giving the Trojans a 6-0 lead. Their missed extra point, as it turned out, was a factor in this game at the end. 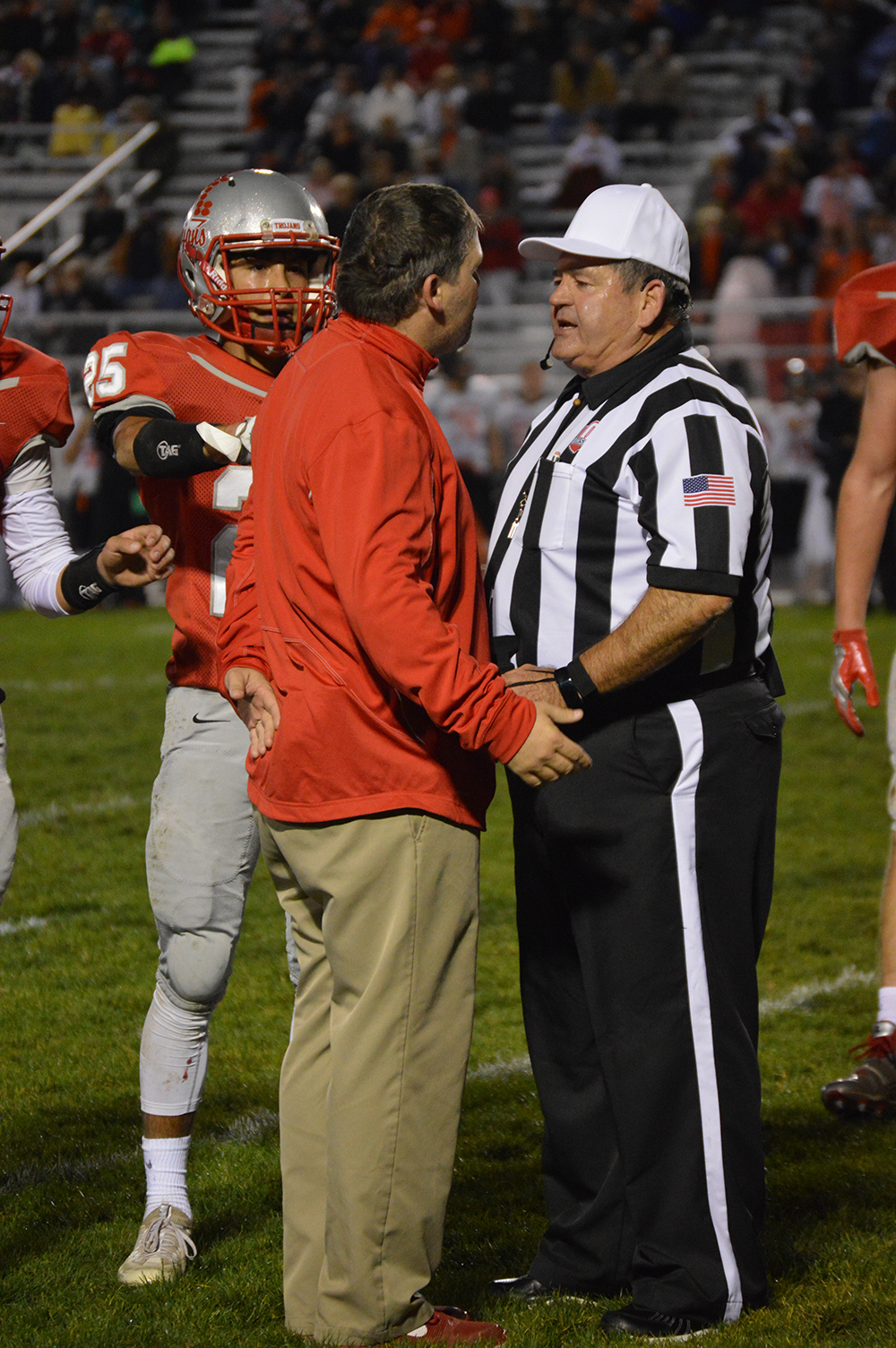 After forcing the Redskins to punt, Troy came back again as Browder broke two more runs for a combined 32 yards to get the ball to the eight yard line, where Hayden Kotwica scampered in for another early score, pushing the Trojans lead out to 13-0 with 8:31 left in the opening period of play.

Volpenhein then drove Anderson deep into Trojans territory before Shane Shoop made a huge interception around the goal line, giving the ball back to the Trojans.

Anderson did score on their next drive when Jake Newton made a 27 yard touchdown catch near the end of the first period to cut into the Trojans lead at 13-7.

Not to be outdone, Browder went back to work. Starting at their own 20, the Trojans kept it on the ground and Browder went the final 57 yards for another score, pushing the Trojans lead out to 20-7.

Shoop picked off another pass for the Trojans, but after Troy ended up punting on their next possession, the Redskins went to the air again as Newton caught another score from eight yards out, bringing the Redskins to within 20-14.

Troy also got the ball to start the third quarter, and actually increased on their lead. Kotwica hit Browder from 27 yards out to make it 41-14 with 8:53 left, with the crowd starting to buzz about advancing to the second round.

Anderson was far from done, and started to chip away at the huge deficit. They scored near the end of the third to make it 41-22, then added two more scores midway through the fourth period to make it a one-score game 41-35 with 5:24 remaining.

After getting the ball back at the Troy two yard line with under four minutes left, they went to work. 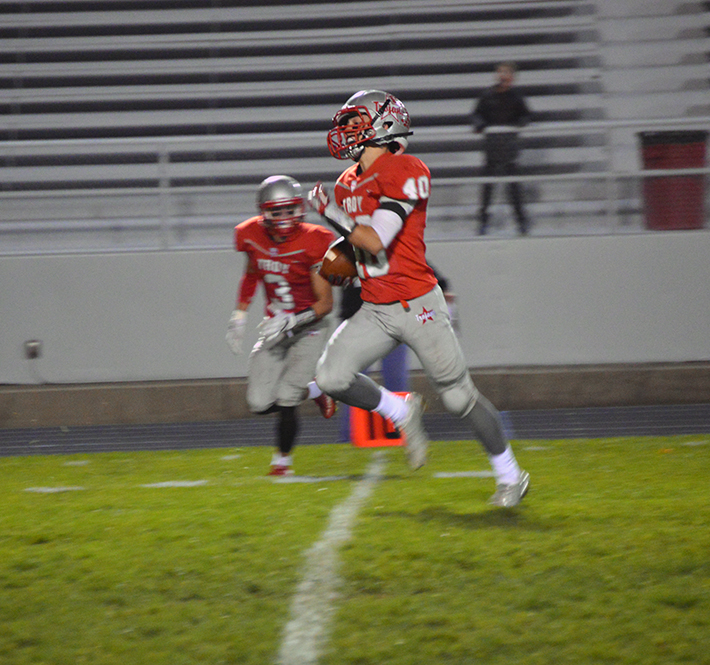 Anderson had a touchdown called back on a holding call, but recovered to move the ball to the 13 on a fourth down play. A pass interference call on an overthrown ball put the Redskins at the Trojans six yard line with seconds remaining and a fourth down awaiting.

Volpenhein tried to sneak it in, but he was stopped short of both the goal line, and the first down marker, and the Trojans celebrated their first home win in 16 years.

It wasn’t 108 years like another streak that was broken this past week, but it was long enough to send the Trojans team and their fans into week 12 of the season.

*Troy now comes back this Friday at 7:30 in a rematch against Miamisburg in a game being played at Northmont High School in Clayton.